Months ago, Gidget the Jack Russell terrier went missing from her home near Philadelphia.  Luckily, she was microchipped. She was found wandering the streets of a Portland Suburb – 3,000 miles away from her home. Thanks to the microchip, shelter workers could identify the owner, and Gidget will soon be taken back home.

Gidget disappeared right after easter, and she’s the only one who knows how she ended up in Oregon, and what she has been doing since April. It was surely a big adventure.

She has never lived in Oregon and is unlikely to have walked there on her own, but who brought her is still a mystery. Shelter workers say she was thin but in good shape when she came to the shelter.

Gidgets owners didn’t have the money to fly out and get her, but sunshine stories like this bring out the best in many. Several people have offered to pay for transportation, and PetLink – the company that manufactured Gidget’s microchip – will pick up the bill for her flight back home. A man also came to the shelter and paid for all expenses in caring for the dog.

Glass House or French Door with a Dog Door? How Does That Work?

Getting a glass house or French door with a dog door placed in the glass is an excellent solution to allow your dog access to the outside.

The PlexiDor Sliding Glass Dog Door and Your Active Dog

An installer will come to your home to measure the width, thickness, and height of the pane of glass in your door. 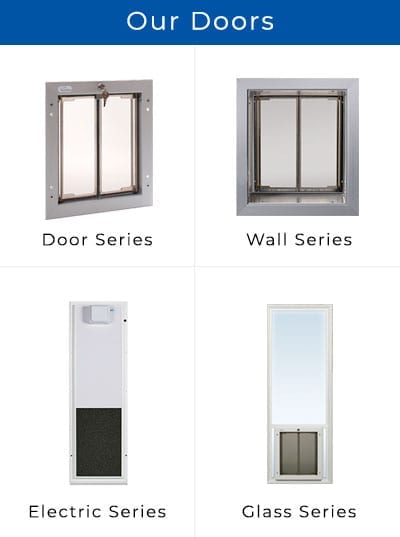